Russia is actively increasing the strike capabilities of the armed forces in occupied Crimea: increasing the number of troops and equipping them with new models of weapons and military equipment and creating conditions for strengthening nuclear capabilities. The population structure of the peninsula has also changed. Crimean Tatars, as a “disloyal” part of the population, are pushed out by Russia to mainland Ukraine or Turkey.

The first information bulletin "White Book 2021", published on the website of the Foreign Intelligence Service (SZR) of Ukraine, informs about it.

The White Book presents the Service’s assessment of the main external threats to Ukraine’s national security, which pays special attention to aggression from Russia.

Russia is transforming Crimea into one large military base comprehensively, considering all necessary factors, including in the social dimension. The population structure of the peninsula continues to change. “Crimean Tatars, as a disloyal part of the population, are purposefully pushed to mainland Ukraine or Turkey, by manipulating the subsidy policy of the military and their families turn into a social support of the occupying power", - the newsletter says.

According to the Service, almost all Soviet anti-aircraft missile systems capable of firing missiles with a nuclear warhead are involved in Crimea. Besides, they are being rearmed - Russia has put new missile systems on combat duty. The complexes control most of the Black Sea, and surface-to-surface missiles completely cover it. 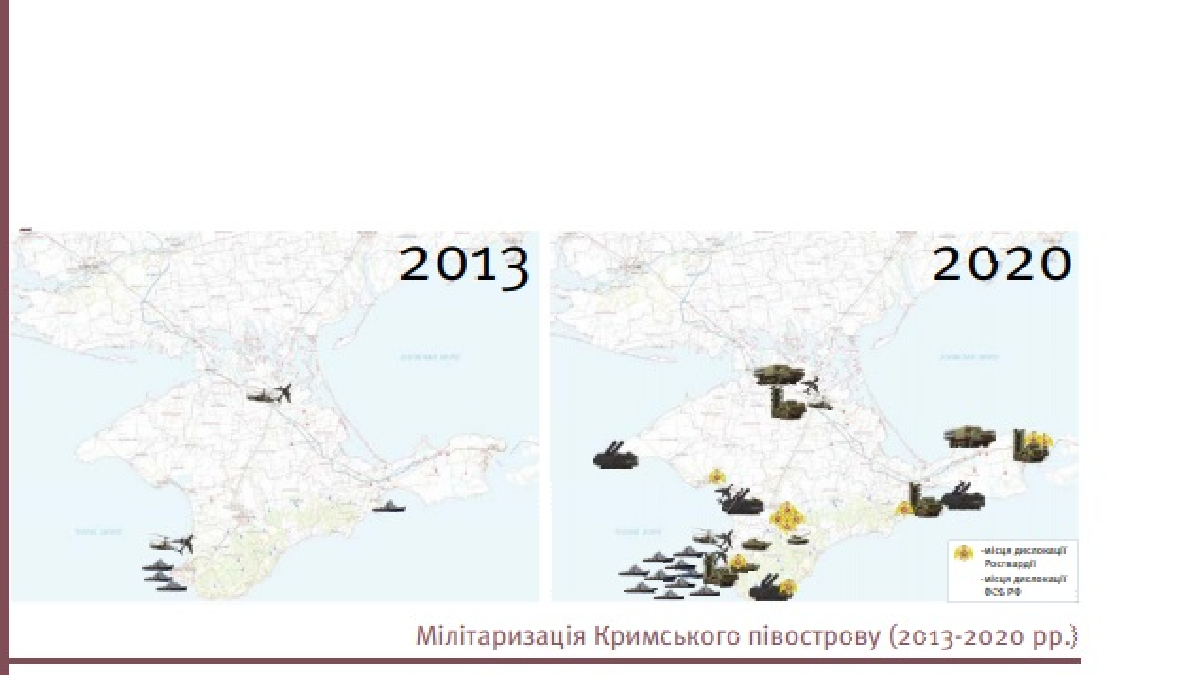 There are also military planes and missile ships stationed on the peninsula which can carry charges with a nuclear warhead.

Russia's plans to develop and use "tactical nuclear weapons", in modern conditions allow the Kremlin to increase the pressure on the international community, as well as aggressively dominate the Black Sea, Mediterranean and European theatres of operations. This threatens the security and national interests of Ukraine, as well as its strategic partners", - Ukrainian intelligence said.

Besides, the total number of Russian military contingent on the peninsula is 32.5 thousand people. According to SZR, the main goal is to transform the Russian Federation into a dominant state in the Black Sea region.

"Turbulence in the post-Soviet space has already become a catalyst for a deep institutional crisis of integration" Eurasian "formats under the auspices of the Russian Federation (CSTO, EAEU, CIS, etc.). This makes it impossible for the Kremlin to implement ambitious geopolitical projects to revive "the Soviet Union 2.0" or in some other form", - such conclusion was made from the analysis by the Ukrainian spies.